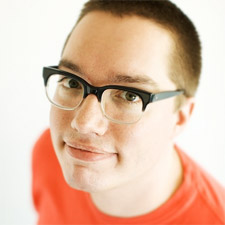 We love Chris Heathcote and have been trying to find a place for him on the Clearleft events schedule for many years. We’re tremendously excited to have found the perfect slot for him at UX London 2013.

If you don’t know Chris, he’s one of the most inspirational thinkers in the UK design community, and talks passionately about the intersection between the digital and the physical worlds. However, unlike many people in the Ubicomp space, Chris is only happy if he’s able to bring these futures to life.

With a background as both a designer and creative technologist, you’d imagine that he’d be working for some crazy experimental collective in Shoreditch. So it’s even more impressive that his CV lists some of the biggest organisations in the UK, including Orange, Nokia, Dentsu and GDS. When he’s not fixing the present or designing the future, Chris can be found hacking food in his secret underground laboratory.

Computing power doubles every 18 months, so we’re now at the point where computing is cheap enough and good enough to embed it everywhere. In fact, it’s cheaper for product manufacturers to include a general purpose OS than write their own embedded systems, and it's cheaper for them to include touch screens, sensors and networking than not. We now have ubiquitous Internet in our handheld devices, but what happens when we embed information and sensing in the environment, both in public and in our private spaces? Will we even have or need these objects we currently call computers? How do we move from personal computers to shared, semi-public information? We'll look at current prototypes and examine how they change interaction and behaviour.