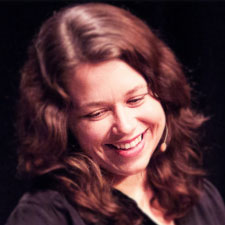 Jennifer has had some amazing roles in the past, including information architect at The New York Times including the app that was demoed at Apple’s iPad press conference, and interaction design lead at Method.

However it’s her interest in cross platform design and mobile UX that really got us excited. Coming from a print background (before getting into digital she used to make books), Jennifer has some fascinating thoughts about how publishers are coping with the move to a post PC and post print era. She got to test some of these theories in front of Steve Jobs when her team was tasked with designing a New York Times application to be demoed on stage at the launch of the iPad. So if you see Jennifer between sessions, ask her about the first full demo and critique she did for Steve.

We first saw Jennifer speak at Webstock in New Zealand, and her workshop on rapid prototyping for the iPhone and iPad was so good, we just knew that we had to invite her to speak at UX London.

For more than two decades, designers have used the same tool to make the web that we’ve used to interact with it, namely the mouse.

The emergence of mobile and touch devices presents us with both an opportunity to step away from our desks and explore new ways of thinking, creating, and working, as well as the responsibility to cultivate empathy and contextual awareness for the specific needs of mobile users.

In this workshop, we’ll challenge the idea that the laptop or desktop & mouse should be our initial creation tool when designing for touch and through pairing sketching with various tools and apps available on iOS devices, we’ll tap, swipe, and pinch our way to touch prototypes.