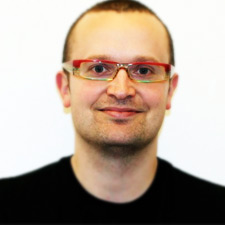 Ben Terrett is head of design at Government Digital Service, Cabinet Office for the UK Government.

We first met Ben Terrett through another Clearleft conference speaker, Russell Davies. At the time, they were working together at the design collective Really Interesting Group and had just won funding from 4IP to develop the excellent Newspaper Club. So it was no surprise to us when Ben went on to join Russell as design director at Wieden Kennedy London, and then later joined the former head of 4IP, Tom Loosemore, as head of design at Government Digital Services.

Ben has always struck us as an amazingly sharp designer and talented public speaker. So we were really excited when Ben agreed to present a case study at UX London on what we see as one of the most interesting start-ups in Britain today, GDS. We look forward to learning about the challenges Ben and his team have faced taking a user-centered approach to designing services for much of the country.

Ben will talk about the design of GOV.UK, picking a particular area and explaining how we use our Design Principles to build an idea into a live feature on the site. This will be a fairly practical talk giving real examples from things we've been working on.